Next year, I’ll have a kindergartner.

Where does the time go??

Any how, on to the story of the grand slam after two strikes.

For big dude’s birthday, hubby took the afternoon off and we met for lunch at a Japanese steakhouse near his work and a park with a great ride-on train. He loves the “cooking guy” (hibachi chef) and trains, so what better than lunch by the cooking guy and a ride on the train?

Well, hibachi was almost a flop because it isn’t the restaurant we usually go to, closer to home. Fortunately, being at hibachi and the spirit of our chef were enough to that I’d call that a ball. Not a hit, but not a strike either. Phew!

While at lunch we decided to check on the train’s schedule.

Well, turns out it won’t open for rides until early May.

STRIKE ONE! (If you’re reading this aloud, be sure to make “strike” multiple syllables: Steeeee-Rike One!)

Back up plan! A movie! Several friends haven taken their kids (similar ages or younger) to see Zootopia! He can have his own popcorn, one-on-one time with daddy, kid-friendly movie….all good things, right?

Turns out this was a very stressful movie experience. He has a vivid imagination, much like mommy, and is easily overwhelmed by intense or suspenseful stories. AND there’s a part where the Bad-Guy-Fox has the Good-Gal-Rabbit in his jaws and is shaking her…

Apparently there was a great deal of hiding behind the popcorn and some screaming at the fox-rabbit sequence.

We’re sitting at a 1-2 count. On the heels of those strikes, and with a potential for high winds in the forecast, we kept our big plans for his party a secret.

Thankfully, Mother Nature smiled on us. The winds were plenty calm so a tremendous bounce house was erected in our backyard.

The party was a big hit! Bounce house, grill out and cupcakes made for a good time to be had by all. And a giant “Noah’s Ark” is still with us, having provided hours of exhausting fun for a bunch of kids (and some parents). Many thanks to the stars aligning so we could knock that one out of the park. 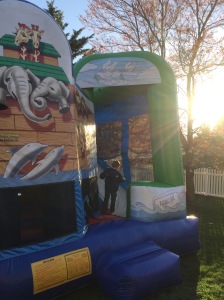 Find something you like at The Mom Who Runs? Sharing is caring! Thanks for the love.

Join The Mom Who Runs on the trails of the internet:

Blogs Followed by The Mom Who Runs:

Areas of Interest on The Mom Who Runs:

Other Sites of Interest from The Mom Who Runs